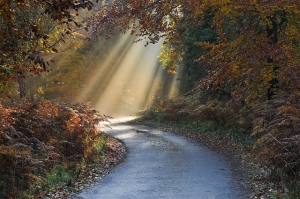 This post is the second in this week’s “Thanks” series that features quotes on thankfulness given by notable Christians. Chris Hendrix, writer of Devotions By Chris, reflects on the following quote by early American theologian Albert Barnes.

As things in my life went downhill ten years ago, my brother helped me to keep things in perspective. Over the course of a few months, an employee of mine, her husband, and child died in a crash; I got pulled into a legal fight for the remaining child; my wife had an affair while I was distracted by the legal battle; she then left me for the other man; and my business went under and I filed for bankruptcy.

While having a pity party one day, my brother looked me in the eye and said, “Believe it or not, someone else has it worse than you do. You can be thankful you’re not them.” No sooner than his words hit my ear, they pierced my heart. I had been feeling like my life was worse than what Job had experienced; the truth was my life wasn’t as bad as it could have been.

When my thoughts of pity changed, my perspective changed. I quit trying to find others to feel sorry for me and started finding reasons to be thankful. My situation hadn’t changed; in fact, it got worse. Instead, what changed when I decided to become thankful was how I saw myself in the storm I was in and the purpose of the storm.

Instead of asking “Why me, God?” I began to ask “What am I to learn from this?” Being thankful changed me from being a victim to a student. Even in my darkest hour God had something to show me and was desperately trying to get my attention. I had been stubbornly ignoring his call and living how I wanted to live. I had ignored his gentle warnings and signals to change how I was living; now his attempts at getting my attention grew louder and louder. God wasn’t content to let me live my life my way; he wanted me to live it his way. I’m thankful now that he didn’t leave me in the life I was living.

The theologian Albert Barnes said, “We can always find something to be thankful for, and there may be reasons why we ought to be thankful for even those dispensations which appear dark and frowning.” In my life I’ve always remembered that someone has it worse than anything I will ever face. I am thankful when I think about that. When times are tough and life isn’t going the way I think it should or I feel I’ve been dealt a bad hand, I no longer pretend I’m the victim. I know now that even when things appear bad or like they can’t get worse, God is there in the storm with me. He hasn’t left me or forsaken me. He’s enduring it with me and wants to use the experience for his glory.

An Attitude of Gratitude

Read more by Chris on his blog Devotions By Chris.